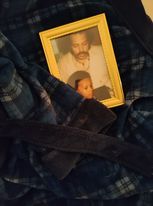 I put on my dad’s robe this morning.

It’s plaid with blues and grays and blacks criss-crossing over a fabric that is too soft to be made from natural fibers. It has a nice long belt that, decades ago, would have been made into a headband to wear during badass karate routines. The cuffs and collar are plush and soft, which make them perfect for whisking away the cold fingers of air that drift through the mornings of my century-old Victorian home. It’s the kind of robe that you want to be in to greet a cheerfully gray December day.

I bought the robe years ago, at the end of a really long day of holiday shopping with my wife. It was the first or second Christmas we were spending together, and we had managed to save enough money during the fall to buy presents for just about everyone on our list – a first for both of us working artists. While waiting for my baby sister’s gift to be boxed up, I realized that I hadn’t picked a gift out for my father.

It made sense that I forgot about him. We hadn’t spoken all that year. By my 30s, we had whittled down our relationship to happy birthdays and merry christmases. But that year, nothing. There was no argument or falling out. No regretful words. He was living his life, and I was living mine. We didn’t hang out every weekend anymore. I didn’t know who he was. And as any veteran of an office Secret Santa can tell you, buying a gift for someone you don’t know isn’t gifting – it’s a chore.

Guilt outweighed annoyance and pulled me into the nearest Target, where I bought the robe and a pair of matching slippers as quickly as I could. I didn’t even notice how soft it was until I wrapped it that night, and gave it to my big sister to deliver to him with some more gifts she bought and put my name on. He called me in January to say thank you.

The robe was the last gift I bought for him. A year later, It was the first thing I took from his apartment after he died.

I have so many of his other things with me now – even his ashes – but that robe makes me think of him the most. I never saw him wear it, but when I walked into this home and found it hanging on the hook of his bathroom door, I couldn’t help but smile. This robe was a part of his routine. It was a part of his life. Thanks to a few synthetic threads, I felt connected to him again.

My dad and I forgot to participate in our relationship. We assumed that love was enough to keep us together. But the silence put a chasm between us so wide that we lost sight of each other. I still struggle with why or how that happened, especially on cheerfully gray December mornings. These were the mornings that I couldn’t wait to see my dad – to play in the snow with him and my cousins, watch action movies, and roam the aisles of the toy store pointing out the subtle yet critical differences between Transformers and Go-Bots.

Now, they are the mornings I wrap that plaid robe with the blues and grays and blacks around me a little tighter, and remember to tell people that I love them.