This Space is Reserved for Adult Perspective 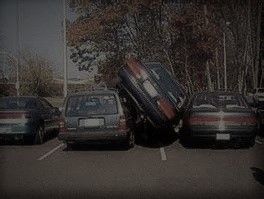 When I was a kid, my mother and my older cousin got into a fight over a parking space at a restaurant. They jumped out of the car and started hurling what we call in the Midwest “cuss words,” a mix of profane phrases crafted to let a listener know that an altercation was coming their way. I remember the man’s growling voice, angry red face and bushy black beard reminded me of Bluto from the Popeye cartoons, which made it all that easier to see him as the villain who was stepping on our right to Truth, Justice, and the American Way.

Superman came on right after Popeye, and they were both white guys with big forearms. I figured they were after the same thing. Generalization was important. Because I was six. But let me get back to this thing.

It was incredible to see my mom in action like that; I felt protected by this badass who I saw coming to the rescue and sticking up for us. She wasn’t going to be bullied, and she sure as hell wasn’t going to let me or my cousins feel that way either. Which was great, because I know I didn’t want to get into with that guy. I just wanted to get the ice cream i was promised, and then go home and play with my Thunder Punch He-Man – arguably the perfect, most subtle marriage of deadly weapon and child’s toy.

This memory flooded my mind this afternoon, when I tried to pull into a parking space seconds after a woman with the exactly the same idea. I hit the brakes in time to avoid a collision, and conceded the space. As I gave a wave and my most Ohio tight-lipped smile, I called upon my ancestors and delivered a good deal of expletives in my mental “instant replay” – that dramatization of a recent incident in which someone wasn’t “so lucky you didn’t go there” and got the worst of you.

Today made me think about how we cast the villains and heroes in each of our productions, and how those roles change when you watch from the pit, and not the balcony.